Zangief's love for his home country outstrips anyone else's, and 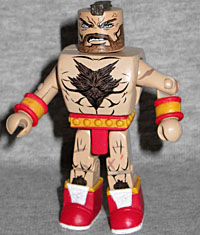 he fights day in and day out to show the world the strength of the motherland. In Russia, he is nicknamed the Red Cyclone.

That's funny, "the red cyclone" is what I call that thing that happens between your stomach and your toilet after eating Papa John's pizza. Zangief was planned to be in Series 2 of the Street Fighter Minimates, but that was cancelled despite every figure in it being awesome. The passage of time has been kind to him though: he has a "powerhouse" chest cap to make him big and muscular. His chest hair is merely painted on, but his boots and wristbands are 3D. So's his belt. The face on the unreleased version is cooler than this one, and his mohawk (a new piece) seems too small.

An overwhelmingly powerful fighter that uses Vale Tudo ("anything goes"), 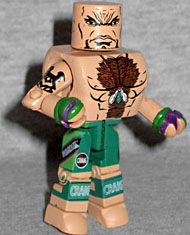 Marduk was at odds with King over the death of Armor King, but the two found friendship in the midst of conflict.

Behold: Marduk, slayer of Tiamat! Sorry, not knowing anything about Tekken, that name only makes me think of the "Stimutacs" episode of Sealab. Vale Tudo is a Brazillian combat sport that was a more violent progenitor to UFC. He has the same chest cap as Zangief, and an even hairier paint app. In fact, all his apps are impressive: his tattoos, his feather pendant necklace, the painful-looking zipper on his crotch, the patches with his name on his thighs, and his first name on his kneepads. His MMA gloves don't have the patches on the back to match the one on his right thigh, but they're new molds.

These figures were clearly only put together in this TRU-exclusive set becaue they were both "the 'big' guy" in their respective games, but that may be enough.
Previous | Next