Everybody hold onto your butts: here come the boring white boys! 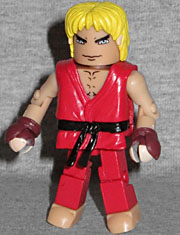 Ken Masters trained with Ryu under the tutelage of Gouken, and has since become eternal rivals with his good friend. He is heir to the Masters Corporation, and one of a short list of fighters who have mastered the hadoken.

This first series of Street Fighter x Tekken Minimates really went out of its way to release a lot of the figures that had been planned for the cancelled Street Fighter Minimates Series 2 (he would have been repainted to make everybody's favorite loser, Dan). His shaggy blonde hair is new, while his shirt and gloves are reused pieces.

A cool, handsome boxer who is currently the reigning middleweight 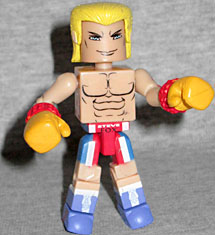 champion of the world, Steve is a serious and strong-hearted character who hates when others meddle in his matches.

Ah yes, thrill to the unending excitement of a set offering the exotic, world-shattering duo of "Ken" and "Steve." Stevearino is wearing his ring attire here, lace-up boots and a pair of blue, white and red shorts. His boxing gloves are new molds - we've had Minimate boxing gloves before, but they didn't look like this. His golden mullet (not to be confused with these Golden Mullets) is a bit loose on the head. In fact, Ken's hair was loose, too. Both guys in this set have hair that turns out of place way too easily.