I know bugger all about Tekken other than the fact that the die-hard arcade kids were all super excited when a new one came out. But that wasn't going to stop me from getting the Street Fighter X Tekken (pronounced "Street Fighter Cross Tekken") Minimates. 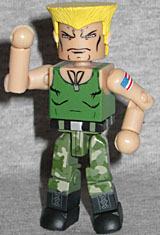 A military man who specializes in hand-to-hand combat, Guile understands that war requires callousness. While he isn't one to talk much, he has a strong sense of justice.

Guile was planned for release in 2006, but that obviously never happened. This Minimate has Guile's trademark idiotic flat top, big and level enough that he balances on his head better than he does on his feet. He has his dog tags painted on his chest, his American flag bicep tattoos, and really intricate camo paint apps on his pants. Sadly, there's no Sonic Boom effect for him.

The agent known as Raven was dispatched by an unknown 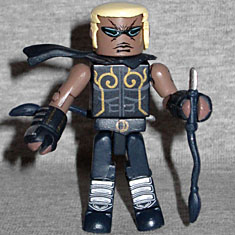 corporation. Using an unknown derivation of classic ninjitsu, he tracks his targets from the darkness and can always be relied on to carry out his duty.

Raven answers the question "what if Blade Wesley Snipes had a baby with Demolition Man Wesley Snipes?" He's a black ninja with crazy blonde hair and dark glasses - and those aren't just random lines on his face, he has a large X-shaped scar right between his eyes. The armor on his shins is just painted on, while the gloves are molded. He has a new piece around his neck with a scarf trailing off it, and a belt with spots in the back where he can store his two removable daggers (although Tekken, unlike Street Fighter, doesn't have any ranged attacks).
Next