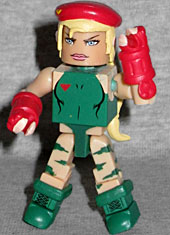 A young woman who belongs to the Delta Red team in the Secret Intelligence Services' Special Forces Unit. Cammy was formerly one of M. Bison's brainwashed soldiers, but has since reverted to her former self.

Cammy is known for two things: her braids and her buns. This Minimate gets the former right, but doesn't even attempt the latter - the block figure format precludes it. Her beret is molded as part of her hair, and she gets new gloves that are all hers! They even put rings around the top of her boots to give them more bulk. None of her anatomy is terribly unrealistic, though the skintone paint on her torso block doesn't quite match the color of her arms and head. The camo apps on her legs are excellent, though. 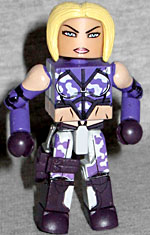 Nina is a professional assassin, who works without choosing her clientele. She is a cool-headed and callous individual who does not let anyone get in the way of her job.

Nina was one of the original Tekken girls, and has been in every game since. This particular costume (which makes her look like she's wearing an old-fashioned menstral belt) debuted in Tekken Tag Tournament 2. It keeps her trademark purple colorscheme, but adds some camo print on her chest and legs. The ponytail hair piece is new, and she has a knife strapped to her right leg (though it's so small it keeps falling out of the sheath).

Neither Nina nor Cammy were done any favors by the block figure format - they need their curves, consarn it! Of course, being a two-pack of girls, they were only available in specialty market assortments, not at Toys Я Us.
Previous