Poison is a former member of the Mad Gear crime syndicate, 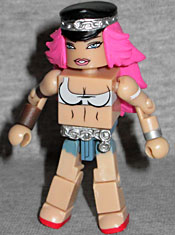 and she is constantly at odds with her partner Hugo, although the two seem to get along just fine regardless.

Poison is not a Street Fighter character. She (like Mike Haggar and Sodom) originally appeared in Final Fight, then later made the jump over. When the question was raised about whether it was appropriate to have men beating up a woman, the decision was made to declare Poison a transsexual, which really doesn't seem that much better. She's got long pink hair spilling out from beneath her black leather cap, and her clothes consist of a torn tanktop, cutoffs, and red high heels - you know, sensible street fighting gear. There's a chain around her hat, and another wrapped around her waist (with a pair of handcuffs molded hanging off the side).

The daughter of a world famous oil czar, Lili has a haughty 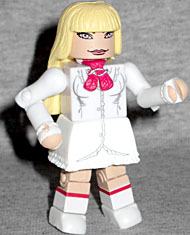 arrogant attitude. She also has a penchant for fighting, and thus engages in street fights whenever she finds the time.

Lili reuses Magik's hair, but the rest of her pieces are new: that means her frilly skirt, her red neck accoutrement (which is also molded with the raised collar of her jacket), and the lacy white gloves she wears. Her legs may look like she's wearing kneesocks, but those are actually boots with a red stripe at the top. In the game, she has a very graceful, gymnastic fighting style, but her idle animation makes her look like she's dry-humping the air. You'd think it would be difficult to keep a white outfit looking this pristine in the middle of a fight, but maybe she's just that good.
Previous | Next