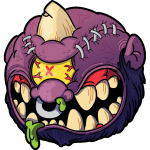 Horn Head enjoys ramming into things with his horn just to defend his tough guy, ready-to-fight persona. Not surprisingly, his one eye often sees double.

If any Madball were going to be the face of the group, it'd be Horn Head: three different companies have made Madballs toys (Amtoy in 1985; Basic Fun, Inc. in 2007; and Just Play today), and every time, Horn Head has been in the first series. Granted, he's not the only one, but a skull or an eyeball isn't quite as distinct as... whatever Horn Head is supposed to be. 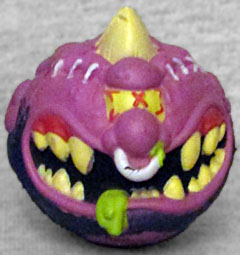 He seems to be some sort of cyclopean ogre, with a single round eye in the center of his face, a bulbous nose with a ring through it, and a gaping mouth full of fangs. On the Art Asylum design, the nose ring had a chain connecting it to one of his pointy ears, but that's been dropped again. Green drool dribbles out of his mouth and onto his black beard. On the original toy, there was a big scar that ran from his cheeks all the way around the back of his head, and it was held shut by big silver staples; it's still here, but it's been moved: it starts at the top of the eye, and scoops down lower on his scalp.

The modern style makes Horn Head look less threatening than before. The fact that the 2017 Madballs all have X's for pupils means his pupil is nearly indistinguishable from the veins in his eye. His fangs are soft and rounded, rather than pointy, so they look like they'd be more "annoying" than "painful" if he bit you. The back of his head is lumpy, and his skin has more veins and warts all over. There's a bald spot immediately under his chin, which may be to show us where his body was once attached?

Series 2 of the blind bags featured "Mix-Ups," re-releases from Series 1 with new colorschemes. Horn Head actually appeared there twice: once with bright blue skin and a magenta beard, and once in solid gold. The blue may be different, but there's no denying it's striking.